Using a Phone Behind The Wheel 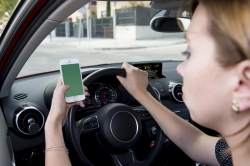 Dont Do It!! Heres a Few Reasons Why

It is illegal to use a mobile phone while driving. But there are some loopholes that drivers have taken advantage of and used their mobile phones legally while behind the wheel. In one case, a driver even managed to overturn a conviction after he was caught using his phone to film. He simply argued that he was not making a call or sending a message.

On November 1st, 2019, the government announced that it would review the law regarding the usage of mobile phones when driving and seal all loopholes. This is due to the increase of young people who film themselves and post the video footage on social media platforms. Some of them have ended fatally and hence the need to ensure no one uses their mobile devices when driving.

This, however, does not stop you from using hands-free devices to interact with your phone. Some of the devices that are allowed include the following:

What the Current Laws Say

Currently, it is illegal to use any hand-held mobile gadget and sat-nav as you drive. It doesnt matter whether you are following a map to get directions  its simply forbidden. If you must follow a map, always ensure that the mobile device being used is fixed on the dashboard or windscreen. In addition, you have to make sure that it doesnt block your view.

The only time you can use your phone is when you park safely. This doesnt apply when stopped by traffic lights or waiting at the lights; it is still against the law to use a mobile phone while in such situations.

Breaking any of these laws can earn you penalty points, a driving ban or a fine. However, emergency calls are allowed - you can call emergency services with your phone while driving if stopping is not safe.

What Happens When You Are Caught Using A Phone And Driving?

The law on mobile phones and driving was introduced back in 2003. When it was first introduced, the penalty was £30. However, it has increased over time, and sits at £200 currently, along with six penalty points that reflect on the driving license.

Can You Lose Your License For Using A Mobile Phone?

Losing your driving license is painfully one of the worst repercussions of using a mobile phone when driving. This happens to new drivers who have had their licenses for about two years or less. Besides, such drivers can only have up to six points as a penalty, unlike those with experience going over two years.

Experienced drivers lose their license if they get a penalty of 12 points within three years. That means you will lose your license after two incidents of being caught driving and using your mobile phone.

The police can also decide to take you to court if they feel your mobile phone usage was extreme. At the courts, the fine goes up to £2000, and if found guilty, you may face disqualification.

A driver who causes an accident due to a hand-held phone will face stiff penalties. It can earn you a sentence of 14 years. Things will not get any more lenient as the government is planning to get more strict by giving life imprisonment to anyone who causes death.

Road safety has always and will always be a serious issue. You never want to be on the wrong side of the law for risking other road users lives due to what would be termed as negligence. For this reason, its imperative that you always consider safe and legal methods of interacting with your phone while driving. Remember, the best thing to do whenever you want to use your phone in an automobile is to park safely to avoid endangering other peoples lives as well as yours. Safe driving!!

If you need an expert opinion on family law, get in touch today on 0116 2620290 to speak to one of our friendly team members or fill in our enquiry form.